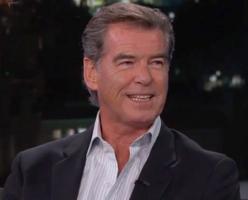 In an appearance with Jimmy Kimmel Tuesday night, Pierce Brosnan put to rest the rumors that he would be playing Cable in 'Deadpool 2'.

"Not true," he said. "Nothing's come my way yet. It was completely made up."

The rumors began when the former James Bond took a picture with Ryan Reynolds and Hugh Jackman. But as Brosnan explains there was nothing behind the photo and they were simply waiting for a flight.

"We were sitting waiting for a plane, the three of us, and the guy says 'Quick, let's get a photograph'. Jump in the middle and Mr. Reynolds says let's do three wise monkeys. Put it out there and it went viral."

"I'm not lying. I don't lie," Brosnan says to pushback that he was being evasive. "I would tell you everything. I'm that kinda guy."