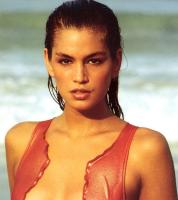 ) that showed the model in a less-than-flattering light was faked, according to the photographer who took the picture.

John Russo, who took the photo that purpoted to show Crawford's less than toned stomach in a "leaked" photo from the Marie Claire shoot, says the image was "stolen or unlawfully accessed and then altered" before being distributed.

"It has been falsely claimed that this photograph represents an un-retouched image of Cindy Crawford. This is not true," Russo says.

"It is a fraudulent altered version of my photograph. I am grateful that this fact has been brought to the public's attention."

The unflattering photo was hailed as being empowering to women and "real, honest, and gorgeous" even by the magazine. But Russo says many of imperfections were faked.

That would explain how the 49-year-old former supermodel appeared toned with a completely flat stomach in a bikini photo posted just days after the leak by her husband.