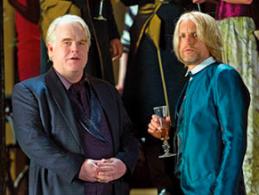 While studio executives have said that Philip Seymour Hoffman's sudden death will have no impact on the release of both parts of 'The Hunger Games: Mockingjay', there is one major scene that was yet to be filmed.

"We're all extraordinarily sad," a Lionsgate executive tells THR. "But as it relates to production, it's going to have no impact. Obviously, we're going to have a couple of work-around issues but the movie will be creatively whole."

"His performances in both movies will be up to the best of his craft. We feel it will be a good tribute to him."

"Why would I want to give people something to look for two years from now?," he says of the unfilmed scene.

But a source says the studio plans on rewriting the major scene, filming it without the actor then using CGI to complete the story.

"They seem to have plans that don't seem very complicated. You can do digital things, you can have conversations where you're not focusing on him but the people he's talking to."

"These days the technology of using someone's likeness is a whole lot easier to do. I won't say you could generate a Philip Seymour Hoffman with all the acting ability, but you could certainly replicate him for a shot or two."