Pete Wentz Says He Regrets Penis Piercing: 'I Was Young and Dumb' 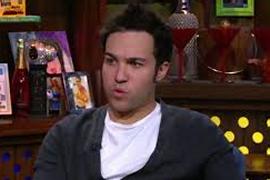 In an appearance on 'Watch What Happens Live' this week, Pete Wentz said he pierced nearly "everything" in his younger years and now regretted it.

The candid reply came in response to a fan's question asking whether he's "ever gotten a piercing below the waist."

"I've had basically everything pierced in my entire life," replied he Fall Out Boy bassist.

"So you had your d-ck pierced?," wondered host Andy Cohen asked.

"I did," said Wentz. "I was young and dumb and full of wisdom. It's not pierced anymore."

In doing so, Wentz also admitted that nude photos that leaked in 2006 were definitely real.

"The worst thing is that I had to have a conversation with my mother about that, which was kind of like a little bit hard to do," he said of the scandal. "And the best thing is that everybody knows what they'll be working with."

Wentz said he also had piercings on his nose, ears, lips, tongue and nipples.