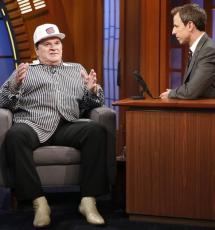 Pete Rose makes an appearance on 'Late Night' with Seth Meyers to talk baseball and share his thoughts about his lifetime ban possibly being lifted by the MLB.

"They don't count their money, they weigh it," Rose said about how the game had changed since he's been out of the league. "I got to play against Willie Mays and Hank Aaron."

"For you smarta--es, I didn't get to play against Babe Ruth. Although I wish I had because he's the greatest player, in my eyes, to play the game of baseball."

Of course, Meyers asked about what Rose thought of reports that his ban would finally be lifted as one final act from Bud Selig.

Rose was banned in 1989 for gambling on baseball games while playing for and managing the Cincinnati Reds.

"I'm the one who screwed up. I'm in the position I'm in because of what I did so I can't worry about Bud Selig's doing this or doing that. I just try to be a good citizen, keep my nose clean, and work hard."