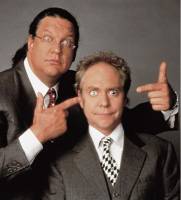 As the national outrage on the new TSA security measures continues to grow, there are some that think fliers should do what Penn Jillette, of Penn & Teller, did back in 2002.

Jillette detailed his ordeal and said he called the cops on a TSA Agent agent because he thought the groping -- without his permission -- constituted assault.

Pen wrote about the experience and what the result of his complaint was on his website:

Last Thursday I was flying to LA on the Midnight flight. I went through security. I beeped, of course, and was shuttled to the "toss-em" line.

A security guy came over. I assumed the position. I had a button up shirt on that was untucked. He reached around while he was behind me and grabbed around my front pocket. I guess he was going for my flashlight, but the area could have loosely been called "crotch." I said, "You have to ask me before you touch me or it's assault."

He said, "Once you cross that line, I can do whatever I want."

I said that wasn't true. I say that I have the option of saying no and not flying. He said, "Are you going to let me search you, or do I just throw you out?"

I said, "Finish up, and then call the police please."

When he was finished with my shoes, he said, "Okay, you can go."

I said, "I'd like to see your supervisor and I'd like LVPD to come here as well. I was assaulted by you."

I said, "I have a problem, please send someone over."

They sent a guy over and I said that I'd like to register a complaint. I insisted on his name and badge number. I filled it out with my name. The supervisor, I think trying to intimidate me, asked for my license, and I gave it to him happily as he wrote down information. I kept saying, "Please get the police," and they kept saying, "You're free to go, we don't need the police."

I insisted and they got a higher up, female, supervisor. I was polite, cold, and a little funny. "Anyone is welcome to grab my crotch, I don't require dinner and a movie, just ask me. Is that asking too much? You wanna grab my crotch, please ask. Does that seem like a crazy person to you?" I had about 4 of them standing around. Finally Metro PD shows up. It's really interesting. First of all, the cop is a BIG P&T fan and that ain't hurting. Second, I get the vibe that he is WAY sick of these federal leather-sniffers. He has that vibe that real cops have toward renta-cops. This is working WAY to my advantage, so I play it.

The supervisor says to the cop, 'He's free to go. We have no problem, you don't have to be here." Which shows me that the Feds are afraid of local. This is really cool. She says, "We have no trouble and he doesn't want to miss his flight."

I say, "I can take an early morning flight or a private jet. " The cop says, "If I have a citizen who is saying he was assaulted, you can't just send me away."

I tell the cop the story, in a very funny way. The cop, the voice of sanity says, "What's wrong with you people? You can't just grab a guy's crank without his permission." I tell him that my genitals weren't grabbed and the cop says, "I don't care, you can't do that to people. That's assault and battery in my book."

The supervisor says that they'll take care of the security guy. The cop says, "I'm not leaving until Penn tells me to. Now do you want to fill out all the paper work and show up in court, because I'll be right there beside you."

The supervisor says it's an internal matter, and they'll take care of it. "If you want to pursue this, we're going to have to go through the electronic evidence."

She says, "Well, it'll take a long time, and you don't want to miss your flight. We have no problem with you, you're free to go."

The cop says, "Your guy grabbed his crank. That ain't right."

So, I fill out all the paper work and insist on a number to call to register a complaint. She says that I filled out a complaint, and I say, "I want more, give me another number. " She gives me a number that I find out later has been disconnected. I leave. I have a card with the name and number on it and the bad 800 number for the FAA.

My flight is way delayed, so I go to Burger King with Glenn - and all the feds are now off duty and at BK and sneering at us.

The next day the woman in charge of public relations calls me to "do anything to make my McCarran experience more enjoyable." I was a little under the weather with allergies and busy, so I didn't call back until yesterday.

It took some phone tag, but I finally got the woman on the phone. I was very cool and sweet. I explained the problem. "Do you allow your crotch to be grabbed without being asked?" I didn't exaggerate, I said that there was nothing sexual, I wasn't hurt, and it wasn't my genitals. I just said it was wrong. She said "Well, your feedback is really important because most people are afraid of us."

She said, "I'd love to meet you so we could clear this up, and everyone wants to meet a celebrity." She said she had watched the videotape and there was no sound, but she saw him reach around. She said she couldn't tell me what was being done to him but... and I stopped her and said, she shouldn't do anything wrong.

I said that I had talked to two lawyers and they said it was really a weird case because no one knows if he can be charged with assault and battery while working in that job. But I told her, that some of my lawyer friends really wanted to find out. She said, "Well, we're very new to this job . . ." and I said, "Yeah, so we need these test cases to find out where you stand."

She said, "Well, you know a LOT about this." I said, "Well, it's not really the right word, but freedom is kind of a hobby with me, and I have disposable income that I'll spend to find out how to get people more of it."

She said, "Well, the airport is very important to all of our incomes and we don't want bad press. It'll hurt everyone, but you have to do what you think is right. But, if you give me your itinerary every time you fly, I'll be at the airport with you and we can make sure it's very pleasant for you."

I tell her that I'm still thinking about pressing charges, and I don't just care about me, it's freedom in general. I say the only thing that was good about it, was that while they were dealing with me, maybe they weren't beating up people in wheelchairs. It was amazing. All she was trying to do was make me happy. She said she'd burned a CD ROM of my video and it was being sent all around and they were going to change their training. She said, "We're federal employees, we're working for you, you pay us and we want customer satisfaction. It doesn't matter what the law is, we have to make you very happy so your flying experience is a pleasurable one, and most people don't give us this kind of intelligent feedback."

So, that was it. I'm flying on Sunday, I have no idea what will happen. How crazy is this? Do I really have some sort of mysterious VIP status to shut me up? Should I press charges? She said she was going to talk to the cop. I said he didn't see anything. She said, "Well, he may be able to see the forest for the trees, because he was right there." I quoted his "crank" comment and she laughed and then knew that was a very bad sign. I said, "He'll tell you I was polite, cold, angry, and funny" - that's more than should be expected of me. I still don't know what I'm going to do, but my advice to everyone is complain all you can and call the cops. I think it might make a little difference. Maybe you can become a VIP too.

Not sure what's worse. The invasive pat-downs or the willingness to give special treatment to a select few.