Penelope Cruz Gets A False Bottom 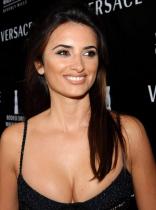 Spanish actress Penelope Cruz was fitted with a false bottom for a recent movie role, after movie producers decided she was seriously lacking the needed curves.

Cruz plays a 'Sophia Loren-style housewife' in 'Returning', but producers thought she didn't have the figure that was needed to pull it off. So the solution was simple, fit her with a custom-built bottom!

"Penelope's role demanded voluptuousness", a spokesperson said. "She needed more curves down below so we decided to fit her with a false bottom."

Although a little relunctant to try it, she liked it so much by the end that she asked if she could keep it and took it home.