Penelope Cruz Confirms She's Four and a Half Months Pregnant 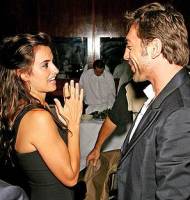 The Spanish agency that represents Penelope Cruz has confirmed that the actress is pregnant.

Cruz married Spanish actor Javier Bardem in a discreet wedding in the Bahamas in July.

That 36-year-old is four and a half months pregnant so that may have been the reason for the couple's quick wedding.

Cruz is currently in London filming 'Pirates of the Caribbean: on Stranger Tides'.

Her recent appearance in Puerto Rico sporting a flowing top and a small bump had sparked some buzz that the recently married actress was expecting.

This will be Penelope Cruz's first child.