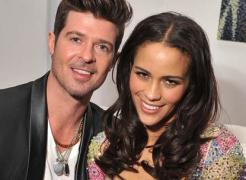 Patton accuses Thicke of physically assaulting her, routinely cheating on her and battling a serious cocaine problem.

The actress claims Thicke threatened multiple times to "bash my f--king head in" and didn't even bother denying about cheating on her, including an occasion around Valentine's Day.

She says he once attempted to have sex with another woman while she slept in their bungalow at the Chateau Marmont.

"When I confronted Robin about this, he admitted to having attempting to have sex with the stranger, but stated that he ended up being unable to do so because the amount of cocaine he used that evening that caused him to be unable to perform," she alleges.

She reveals after they separated, Thicke had a "manicure and pedicure party for six naked women in our family home."

The documents led to the judge denying Thicke's request for temporary sole custody and granted Patton a temporary restraining order as the victim of domestic violence.

"Paula never reported any domestic violence until she was in a position of contempt by violating the custody orders," Thicke's lawyer tells People. "Infidelity has nothing to do with custody. She is attempting to throw anything at him to hurt him, but Robin's focus is their son."