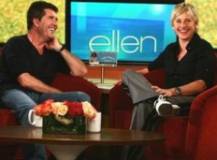 Paula Abdul is giving her 'American Idol' replacement the thumbs-up, at least publicly.

"I think Ellen will b a great judge on 'Idol'," Abdul says of the surprise announcement of Ellen DeGeneres as the show's fourth judge. "She is wildly funny, talented and I wish her the best of luck!"

And Paula might jut be seeing parts of her persona in Ellen when the show returns in January. In an interview on Ryan Seacrest's KIIS-FM radio show Thursday, DeGeneres said that she'll be an 'honest' judge and do her best to keep fellow judge Simon Cowell in check.

"I'm really honest, but I think you can be honest in a kind way. That's one thing Paula did bring to the show, that empathy and compassion, so I hope to do that," she said. "I'll tell Simon the same thing I tell him when he's on my show -- that he's mean. You can be constructive, and you can criticize someone in a way that's helpful and not mean-spirited."

"I'm just a fan like everyone else. The people choose. Ultimately, it comes down to them, not some executive in the music industry. I hope to be that voice."

Ellen said she was 'surprised' when she was first approached about the job: "I didn't think for a second that it could be me. I had no idea this was even a possibility. When they came to me, I was like, 'I love that show! I would give anything to do it.'"

Meanwhile, the other woman on the judging panel, Kara DioGuardi, says she's 'ecstatic' with the addition: "I think she's going to bring so much to the show. She's somebody who loves music. She's positive. She loves kids. She's somebody who has watched the show from the beginning, and I think ultimately it's going to be a great new energy. I'm so excited to hang out with her and completely ecstatic. I'm a huge Ellen DeGeneres fan."

In a separate interview, Randy Jackson explains that Ellen's lack of expertise in the music arena doesn't really matter: "There's so much music industry insider talk with me and Simon and Kara that I didn't think we needed any more of that. I think she could be the voice of the people."

"It's like somebody in the home audience watching and going, 'What would I say?' Ellen's going to be saying it. It's going to bring a really interesting, different perspective to the people and to the panel."

Ellen has reportedly signed a five-year deal with the top-rated reality talent show.