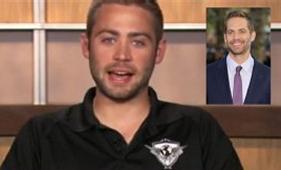 In an interview with Baltimore's FOX45, Paul Walker's brother, Cody, became emotional when talking about the late actor.

Cody was talking about his brother's charity, Reach Out Worldwide, and the legacy he left behind when he found it extremely difficult to hold back the tears.

"He was just awesome," said Walker. "Super down to earth guy... super down to down earth guy that, you know, he did this without... this is something he did without ever wanting recognition for it."

"He could've easily always thrown his name all over the organization but he wanted it to grow organically and he wanted to make it a difference... He was a great guy. He was my big brother and I looked up to him very much."

Cody and brother Caleb are both filming 'Fast and Furious 7' by standing in for their brother and complete shooting.