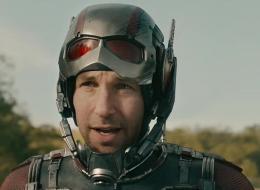 'Ant-Man' star Paul Rudd suggests calling in The Avengers in the latest trailer for Marvel's film about the pint-sized superhero.

In the film, master thief Scott Lang must embrace his inner-hero and help his mentor, Dr. Hank Pym, protect the secret behind his spectacular Ant-Man suit from a new generation of towering threats. Against seemingly insurmountable obstacles, Pym and Lang must plan and pull off a heist that will save the world.

Along with Douglas as Dr. Hank Pym, Evangeline Lilly (photos

Directed by Peyton Reed, 'Ant-Man' has received rave reviews, including one from James Gunn. It has a release date of July 17, 2015.