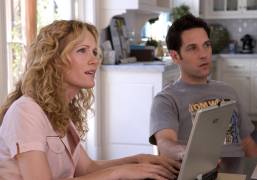 Judd Apatow's next project will see Leslie Mann and Paul Rudd reprise their 'Knocked Up' roles for a spin-off film.

In the 2007 Judd Apatow comedy, Mann played Katherine Heigl's older sister, Debbie, who is married to Rudd's character, Pete, a rock band talent scout with a penchant for fantasy baseball.

Apatow will write and direct the as-yet-untitled film, his first since 2009's 'Funny People'. Mann, Apatow's wife, has appeared in every single one of her husband's films, while Rudd has only been left out of 'Funny People'.

"It is neither," Apatow says about whether the film will be a prequel or sequel. "It is just a story from Pete and Debbie's current life. People really responded to their characters and problems. I felt like there was a lot of ground I could explore with them, so we'll be shooting in July and will come out the following June."

It's not clear whether Heigl or Seth Rogen will return but it will likely only be for brief cameos, if anything.

"There are some fun details yet to reveal but I will let them come out slowly," adds Apatow. "It's more fun that way."

'Knocked Up', which had a production budget of $30 million, grossed more than $200 million worldwide.