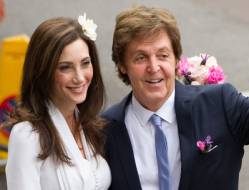 Paul McCartney may be a Beatles legend but that even that didn't get him into Tyga's Grammys afterparty.

A TMZ paparazzo captured the denial on video. The footage showed them patiently waiting to get into the nightclub before the bouncers turned them away, not once but twice.

"How VIP do we gotta get? We need another hit, guys," joked McCartney. "Work on it!"

After being mocked for rejected the singer, rapper Tyga took to social media.

"Why would I deny Paul McCartney stop it. He's a legend," he wrote. "I don't control the door."

"I had no knowledge SIR PAUL was there," he respectfully added. "I just performed and left."