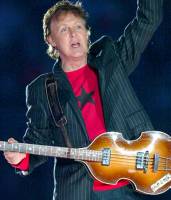 Paul McCartney has cancelled his entire Japan tour because of his illness.

The former Beatle, who had been forced to cancel several appearances after catching a virus last week, is apologizing to his fans.

McCartney's tour in the country was supposed to include a long awaited performance at Nippon Budokan hall on Wednesday, where the Beatles performed during their first Japan tour in 1966.

The scheduled makeup concerts for previously missed dates have also obviously been cancelled. The tickets had been a hot commodity in Japan with fans travelling across the country and paying as much as $1,000 for a ticket.

"I'd like to thank my Japanese fans for their love, messages of support and understanding," the signer says in a statement. "I hope to see you all again soon. Love, Paul."