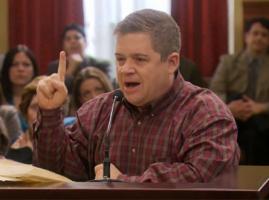 Patton Oswalt tells Conan O'Brien the story of the birthday clown he thinks was hired from 'Barely A Clown Productions'.

"I'm talking to the mom. Hey, this is a really nice party. She goes oh, thanks. I hired a clown and he's like an hour late. I don't know where the clown is," Oswalt begins. "And then in the distance, like at the edge of the woods, I'm not kidding, there was like suddenly from the edge of the woods just appeared -- it was just this clown just kind of emerged like out of the woods."

"Look. A clown in the distance during the daytime is ball-retractingly terrifying. He was not there and then he was there and he's an hour late so you think oh, he's going to be running towards us. No, just appling along with his little roller bag."

"As he got closer I started to realize that his clown outfit, all it was was a yellow wig. Kind of silly but not crazy. A kind of colorful vest and then kind of this. That's all he'd done. Jeans and he'd put a red heart here. I wanted to ask her did you go to barely a clown productions."

"We find the most by -- disaffected sober hipster. Put down the Foster Wallace, get yourself a vest and it's time to entertain. He comes walking up, doesn't say hi to the mom or dad. He comes in, sits down at a bench and goes 'all right, face painting.'"

"There's a clown in L.A. named Mr. Silly. I've seen him at three parties. He's the David Lee Roth of party clowns. He shows up, cartwheels into your house. Takes over. Parents, go have a drink, you're done. I got this. This guy just goes, all right, face painting. So all the kids come running up because they're excited. I want to be iron man. I want to be Elsa from 'Frozen.'"

"He gave every kid -- took his thumb in the makeup and gave them a blue heart. All they got. So now it looks like it's this creepy cult meeting.."

"Then the clown goes OK, time to play a game. Here's the clown's game. He stands at a tree here and imagine the other trees at the edge of that couch and he just makes the kids run back and forth until they get kind of nauseous and tired."

"So now the mom says, I'm so pissed off right now. I kind of want to see where this goes. That's my philosophy for raising kids now. I'm going to be pissed off and see where it goes."

"Basically it ended with -- he goes, OK, balloon an matter of minutes steady tone. Never did the clown voice. The kids go, I want a helmet, fairy wings. He takes this balloon, blew it up and it's a sword. Everyone got a sword."