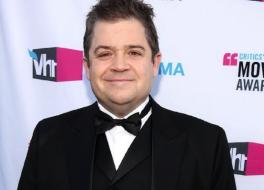 Patton Oswalt has written an essay detailing his struggles to adapt as a single father following wife Michelle McNamara's sudden death in April.

"I was half of an amazing parenting team, except we weren't equals. Michelle was the point person, researcher, planner and expediter. I was the grunt, office assistant, instruction follower and urban Sherpa," Oswalt writes in GQ.

"It feels like a walk-on character is being asked to carry an epic film after the star has been wiped from the screen."

"Imagine Frances McDormand dying in the first act of Fargo and her dim-bulb patrol partner — the one who can't recognize dealer plates — has to bring William H. Macy to justice."

"It is for Alice. I'm moving forward — clumsily, stupidly, blindly — because of the kind of person Alice is," he continues. "She's got so much of Michelle in her."

Oswalt has said that an accidental Xanax overdose may have led to his wife's death.