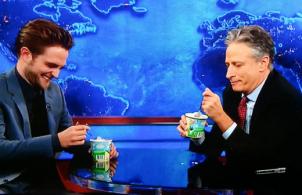 In Robert Pattinson's first interview since the Kristen Stewart (photos

"What have you been up to? We're just a couple of gals talking," Stewart said as he welcomed Pattinson, who was there to talk about upcoming film 'Cosmopolis'.

"The last time I had a bad breakup, Ben and Jerry got me through some of the tougher times. We're just a couple of gals talking... tell me everything!"

"I'm going to split my Spanx," joked a nervous-looking Pattinson.

"The last time I had a bad break-up, Ben & Jerry's got me through some of the tougher times. 'Boy you are better off, kick her to the curb,'" Stewart said in a girl's voice.

"I don't know how to approach this. This is the weird thing about these interviews. I'm going to sound like an idiot. My biggest problem in my life is that I'm cheap," replied Pattinson.

Pattinson implored 'Twilight' fans to go out and see his new film if they wanted to support him.

"If there are any Twilight fans tuned it, I genuinely want to make Cosmopolis have a higher opening weekend than Dark Knight. It's in six cinemas, so it's going to be a challenge," he said.

"Here's my wish for you," Stewart offered as they concluded the interview. "I know you're going through some weird business. Get a handle on your business in private. I wish you all the best. You're a nice guy!"