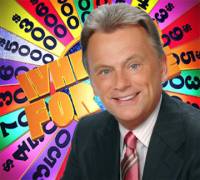 'Wheel of Fortune' host Pat Sajak is railing against those that continue to warn against the threat of global warming.

"I now believe global warming alarmists are unpatriotic racists knowingly misleading for their own ends," Sajak said on Twitter this week.

Sajak then said people who believed in global warming had an excuse no matter what the weather was: "Very hot weather: 'We're all going to die!' Very cold weather: 'There's a difference between climate and weather, moron!'"

After backlash from some of the game show's fans, Sajak said: "As most of you know, original tweet was intended to parody the name-calling directed at climate skeptics. Hyperbole."

"Later today I'll be tweeting my views on the subjects of nuclear proliferation and free-range chicken."