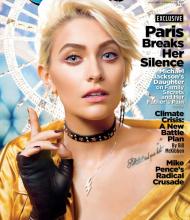 "You just get used to it. I live life with the mentality of, 'Ok, I lost the only thing that has ever been important to me.' So going forward, anything bad that happens can't be nearly as bad as what happened before. So I can handle it."

She says growing up, she was sheltered from her father's fame.

"I just thought his name was Dad, Daddy. We didn't really know who he was. But he was our world. And we were his world."

"When you’re at home, your dad, who you love more than anything, will occasionally come in, in the middle of class, and it's like, 'Cool, no more class for the day. We're gonna go hang out with Dad. We were like, 'We don't need friends. We've got you and Disney Channel!'"

Even though they grew up in Neverland, Paris says: "We actually had a pretty normal life. Like, we had school every single day, and we had to be good. And if we were good, every other weekend or so, we could choose whether we were gonna go to the movie theater or see the animals or whatever. But if you were on bad behavior, then you wouldn't get to go do all those things."

The model reveals she had tried to commit suicide "multiple times" by 2013, years after the King of Pop's death in 2009. In the attempt that was widely reported, she slashed her wrists and took 20 pills of Motrin.

"It was self-hatred, low self-esteem, thinking that I couldn't do anything right, not thinking I was worthy of living anymore," she admits. "It was just once that it became public."

"I'm a completely different person," she says. "I was crazy. I was actually crazy. I was going through a lot of, like, teen angst. And I was also dealing with my depression and my anxiety without any help."

Paris also says she believes her father was murdered and remembers Michael's "exhaustion" from rehearsals.

"I'd tell him, 'Let’s take a nap.' Because he looked tired. We'd be in school, meaning downstairs in the living room, and we'd see dust falling from the ceiling and hear stomping sounds because he was rehearsing upstairs."

She says AEG Live, the promoters behind the concerts that were to happen, do "not treat their performers right."

"They drain them dry and work them to death... I looked at my Justin Bieber ticket, saw AEG Live, and I thought back to how my dad was exhausted all the time but couldn't sleep."

"He would drop hints about people being out to get him. And at some point he was like, 'They're gonna kill me one day.' It sounds like a total conspiracy theory, and it sounds like bulls---t, but all real fans and everybody in the family knows it. It was a setup. It was bulls---t."

"It's a chess game," she teases. "And I am trying to play the chess game the right way. And that's all I can say about that right now."