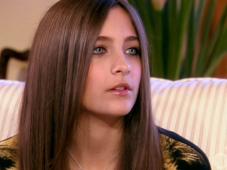 Paris Jackson is recovering and getting the attention she needs after her suicide attempt on Wednesday.

"Being a sensitive 15-year-old is difficult no matter who you are. It is especially difficult when you lose the person closest to you," she adds with the fourth anniversary of Michael Jackson's death approaching on June 25. "Please respect her privacy and the family's privacy."

It has now been confirmed through multiple sources that the teenager overdosed on 20 ibuprofen pills then cut her wrists with a kitchen knife.

Meanwhile, there are reports that Paris has been bullied and feels "like an outsider" at school.

"She has been complaining recently about feeling bullied at school," a source tells E!. "She does not have very many true friends there, and she doesn't feel like she really fits in there."

She has also seen a rift develop between herself and younger brother, Prince Michael.

Prince apparently did not support Paris reaching out to mother Debbie Rowe, who she has been spending more time with.

"He does not understand why Paris is so intent on rebuilding the relationship. He does not feel a bond with Debbie and feels like it would betray Katherine Jackson in some way," says a source.

Finally, in a 20-minute video posted last week, Paris demonstrated how she does her eye makeup as she receives and replies to several texts on her phone. She also revealed that she watches the film 'Tangled' three times a week and growing up fantasized about marrying a cowboy.