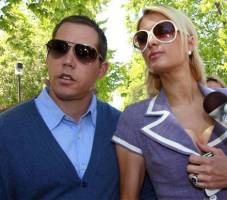 )'s boyfriend, Cy Waits, was arrested by police outside the LA courthouse on Wednesday.

Coincidentally, Hilton was at the courthouse to testify against a suspect in an attempted break-in at her home last year.

The man reportedly broke through a pack of press and paparazzi and threw water at Waits' face then grabbed Waits' neck before he was dragged to the ground by Hilton's security staff.

"After the attack, they realized he is the same intruder that showed up to her home on a bicycle a few months ago," said Hilton's publicist. "He has now been taken into custody. They are both a bit shaken up but thankful security acted quickly."

"Omg! That other psycho intruder just punched Cy in the back of the head as we were walking into the court house," Hilton wrote on Twitter about the incident. "So scary!"