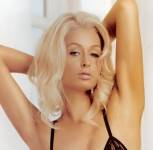 ) says that she is set to guest star on an episode of 'The L Word', the Showtime series that follows the lives of a group of lesbian and bisexual women and their friends.

Paris tells 'Parade' magazine: “Once the strike is over, we are going to start talks, but I am definitly shooting it.”

Asked whether the she will be getting up close and personal with any of the female stars on screen, Hilton tells the mag: “I don’t know yet. It's true. I have no idea what kind of character I'll be playing, but it's a good show."

Interestingly, this news comes just a week after she was spotted making out with Elisha Cuthbert in public, which was preceded by her visit to Los Angeles lesbian nightspot 'The Falcon Club.'