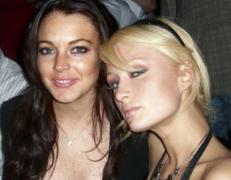 ) after her brother, Barron Hilton, was assaulted at a Miami Beach party.

Hilton reportedly told police that Lindsay Lohan was behind the attack because she approached him earlier and warned him "You talk sh-t about me to my boyfriend, this is what you get."

He was then assaulted by a man who told the 24-year-old to leave and hit him in the face. He suffered deep cuts on his forehead and nose.

"They both will pay for what they did. No one f--ks with my family and gets away with it!!," Hilton wrote on Instagram.

She also echoed a post from sister Nicky that read: "Bad things happen when you hang out with bad people."