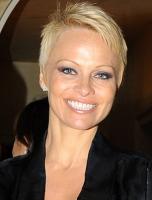 Pamela Anderson has penned a lengthy poem after filing for divorce from Rick Salomon following the former couple's second attempt at marriage.

In the approximately 1,200 word write-up on Facebook, the 47-year-old says: "What have I done? I knew it was wrong from the start. Never marry a rich man."

Although the actress does not name her husband of six months, it's obvious the failed relationship has prompted her to make some deep observations about her lovelife.

"I love being in love--but expectations, make it impossible to be happy or satisfied."

"Tradition... just seemed so romantic. I guess it's a used up ideal -- for the old fashion... not modern."

"No man knows what to do with me. I blame myself," she continues. "To play with me, is eternal. I'm not 'on the clock' or on the 'payroll'. I knew it was wrong from the start,
primitive, base instinct. Never marry a rich man... Euros from a Vagabond."

Among other things, Anderson even ponders prostitution.

"I wonder how prostitution works," she asks. "Does it ever feel good? Lost little souls being taken advantage of... or taking advantage of. Is it just for money? Is it for attention? Or both."

"Is it healthy, to be fantasized about by many men? Isn't that the goal.
How many can we effect," she says. "It's natural to want to be desired."

"You know, it's not freaky enough, to just be beautiful. I've never felt beautiful. I always felt sexual... and blind. Oh wowwy... I'm losing my mind. I'm shutting down. It's such a strange feeling... going numb in front of everyone."