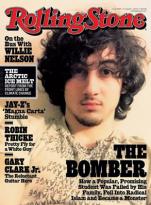 Rolling Stone is receiving criticism after revealing its cover for the issue that hits shelves Friday is none other than alleged Boston Bomber Dzhokhar Tsarnaev.

And not just any photo of Dzhokhar but one in which he dreamily stares into the camera behind tousled curls and soft-lighting, appearing more as a rock star than a terrorist.

Rolling Stone says the cover relates to its story of a "deeply reported account of the life and times of Boston bomber" with interviews of "dozens of sources – childhood and high school friends, teachers, neighbors and law enforcement agents, many of whom spoke for the first time about the case – to deliver a riveting and heartbreaking account of how a charming kid with a bright future became a monster."

"The fact that Dzhokhar Tsarnaev is young, and in the same age group as many of our readers, makes it all the more important for us to examine the complexities of this issue and gain a more complete understanding of how a tragedy like this happens," it added.

However, many believe the cover glamorizes the bomber, who pleaded not guilty a week ago.

"Shame on you Rolling Stone for glorifying a monster!," said Kelly Osbourne on Twitter. "In case you failed to realize the Boston Bomber is a murderer not a band and has no place being on the cover of Rolling Stone."

One chain has already decided not to carry the issue with the controversial cover.

"CVS/pharmacy has decided not to sell the current issue of Rolling Stone featuring a cover photo of the Boston Marathon bombing suspect," it says in a statement. "As a company with deep roots in New England and a strong presence in Boston, we believe this is the right decision out of respect for the victims of the attack and their loved ones."