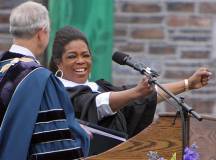 Oprah Winfrey talked about courage, making wise choices and helping others during a commencement address Sunday at Duke University.

Oprah attended not only as a proud godmother, as son of her best friend Gayle King graduated from the university, but she received an honorary doctor of humane letters degree of her own.

"You really haven't completed the circle of success unless you can help somebody else move forward, move to higher ground," Oprah said during her 25-minute speech.

"That is success. That's it. That's why we're all alive. To use ourselves, our lives for something bigger than ourselves. One of the best ways to enhance your own life is to enhance somebody else's."

"Each of us has to stand in our own shoes. Will you stand in them in humility and compassion and courage? Every day will give you a chance to make that choice."

Oprah concluded as she recalled why she had cancelled the Columbine Massacre story that was to air on her talk show. She said something about the story didn't feel right, and the moment she felt the story would send a dark energy into the world, she refused to air it, even though it meant the promos she had been running all week were for naught.

"Will never wants people to know he knows me," Winfrey joked about making a commencement speech at her godson's graduation. "I'm like his crazy aunt that they let out at commencements."

There was also some comedy from student speaker Robert Paul Jones, a 2002 graduate who returned to Duke to receive his medical degree, teased Winfrey about her celebrity status: "Ms. Winfrey, apparently your limousine is double-parked in front of the chapel. Duke Parking wanted me to let you know they won't release your honorary degree until you pay your parking fine."