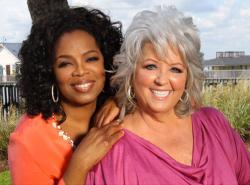 Oprah Winfrey, who interviewed Paula Deen for an episode of 'Oprah's Next Chapter' last year, said she wanted to reach out to the chef after the N-word controversy first broke.

"In the very first days I tried to reach her and then I decided to stay out of it as I saw it blowing up," Winfrey tells Entertainment Tonight.

She believes "in time she will be fine" but "for me, it all just felt kind of sad."

"I think Paula Deen was sort of used as a symbol, but I think lots of people use the word inappropriately all the time," says Winfrey.

Winfrey, who is doing the rounds to promote her upcoming Lindsay Lohan (photos

) interview and role in Lee Daniels' 'The Butler', says she would like to sit down with Paula Deen after the dust settles.

She wants to make sure she doesn't engage Deen in a "defensive conversation" so they can have a honest talk.

"I just really want to know what happened," she says.