Oprah Winfrey: I Didn't Think I Was Qualified For Office Until Donald Trump 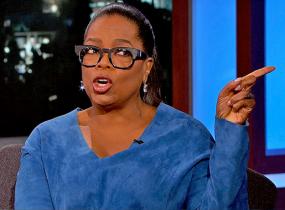 Oprah Winfrey talks to Jimmy Kimmel about the possibility of being Donald Trump's running mate, as the presumptive Republican nominee said earlier in his run for the White House.

Winfrey says she thinks Trump was joking but would tell him "I'm with her," referring to her endorsement of Hillary Clinton.

"But I will say that for many years, until this year, I used to think 'Wow, why do people say that? I have no qualifications to run?'"