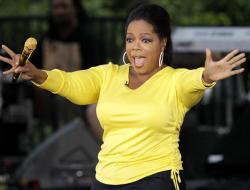 Thirty one after the host filmed it, Oprah has shared a glimpse of the 1983 audition tape that helped the media mogul nab the hosting duties at 'A.M. Chicago'.

In the audition tape that was compiled overnight, a young Oprah begins by explaining the origin of her unusual name.

"Originally, I was named from the Bible by Aunt Ida, who named me from Ruth, the first chapter at the fourteenth verse, Orpah, but no one knew how to spell in my home, and that's why I ended up being Oprah," Winfrey explains.

She got the job with 'A.M. Chicago' and two years later, the program was renamed 'The Oprah Winfrey Show' and picked up nationally -- which she hosted for 25 seasons, taping over 4,500 episodes through 2011.