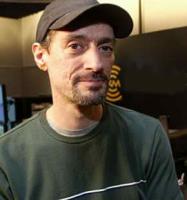 'Opie & Anthony' co-host Anthony Cumia has been fired by SiriusXM after his racist rant on Twitter last week.

"SiriusXM has terminated its relationship with Anthony Cumia of the Opie & Anthony channel," the company says in a statement. "The decision was made, and Cumia informed after careful consideration of his racially charged and hate-filled remarks on social media."

"Those remarks and posting are abhorrent to SiriusXM, and his behavior is wholly inconsistent with what SiriusXM represents."

Cumia unleashed a tirade on Twitter after an alleged assault by an African-American woman at Times Square in New York City.

Cumia called the woman a "savage," a "pig," and an "animal" in the rant that spanned hours.

"There's a deep-seated problem with violence in the black community," he also said. "Try to address it and you'll be exiled to Racistville. But it's real."

Cumia has not released an official statement except to simply say "F--- Sirius."