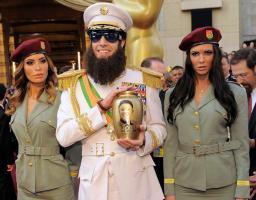 With the release of 'The Dictator' less than a month away, the studio has released the official opening scene of the film.

The film begins in the style of a documentary that asks who North African dictator General Aladeen really is.

The minute long clip goes on to explain Aladeen's rogue state of Wadiya is pursuing nuclear weapons, the dictator participated in a national version of the Olympics, and recently brought some confusion to his country after revising his native language.

'The Dictator', which also stars John C. Reilly, Ben Kingsley, has a release date of May 16.