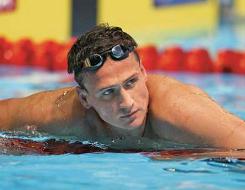 Eleven time Olympic medalist Ryan Lochte has landed himself a cameo role on the CW's '90210'.

Lochte will appear on the October 29 episode of the series as a guest at a resort, that Naomi, played by AnnaLynne McCord and Max, played by Josh Zuckerman, are visiting, in the hopes of improving their relationship.

Executive Producers Patti Carr and Lara Olsen say they would've liked to have put the 28-year-old, who has already expressed interest in appearing on 'Dancing With the Stars' and 'The Bachelor', in the water but they're just happy to have him on the show.

"When we found out Ryan Lochte was going to be in town and might appear on '90210' we felt like we'd won a gold medal. Team USA are all-stars in our book, and we're so excited he's making an appearance on the show."

"We only wish the episode was a surf event so we could have gotten him in the water, but he deserves a little rest on dry land."