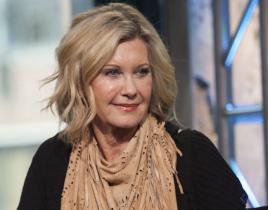 Olivia Newton-John has been diagnosed with breast cancer for the second time.

Olivia announced on Tuesday she is "reluctantly" postponing next month's concert tour dates in Canada and the United States.

She initially postponed the first half of her concert tour two weeks ago because of severe back pain. However, further tests discovered it was actually cancer that spread.

"The back pain that initially caused her to postpone the first half of her concert tour, has turned out to be breast cancer that has metastasized to the sacrum," reads a statement.

"In addition to natural wellness therapies, Olivia will complete a short course of photon radiation therapy and is confident she will be back later in the year, better than ever, to celebrate her shows."

The 'Grease' star was first diagnosed with breast cancer more than 25 years ago, in 1992.