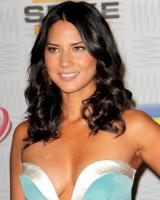 ) unveiled her 'Playboy' cover photo this week on G4's 'Attack of the Show'.

The bad news? We won't see Olivia Munn nude in the issue but she says it wasn't due to lack of trying on the magazine's part.

In fact, 'Playboy' wanted her to pose naked inside the upcoming July issue, but Munn says it was an easy decision.

"It was an immediate 'No'," she says. "Unless you are like 40 and you have to prove something I don't think it's necessary for me to be naked. I just thought it would be a total sellout on my part. But it became like my favorite thing to tell everybody that I got the offer."

"Two weeks after originally popping the question, the magazine called back. "My publicist said, 'They want you to do it non-nude."

Munn agreed but says she still had to pose for a 'stressful' photo shoot in which the stylists constantly tried to get her to wear barely-there outfits.

"It was probably the most tense shoot I've ever been on," says the 'Lesbionic Woman'. "I had this idea of a fun, flirty, sexy and very summery shoot but they brought out black leather, spandex and an all fishnet one-piece bathing suit that basically exposed everything."

In the end, she decided to go with a bikini: "I am happy with the cover. I'm in a red bikini with lots of makeup and I'm in a pool. I've done it before but now it's in Playboy."

Munn also reveals that she will be appearing in the 'Iron Man' sequel: “All my scenes are with Robert Downey and one other actor. I don’t know how much I can say."