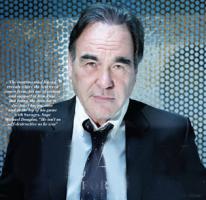 Oliver Stone thinks Hurricane Sandy was a 'punishment' from Mother Nature for ignoring the issue of climate change.

"I was a little disappointed at the third debate when neither of them talked about climate control and the nature of the situation on earth," the filmmaker says in an interview with the Huffington Post.

"I think there's a kind of a weird statement coming right after it. This is a punishment. Mother Nature cannot be ignored."

"That's all I thought about. The storm will pass. The campaign will pass. But unfortunately the nature of this present world situation will not," he added.

"There's this attitude that we 'deserve' to be in charge," Stone said. "I don't believe in that. We act as if we have this right of kingship -- we act as tyrants."