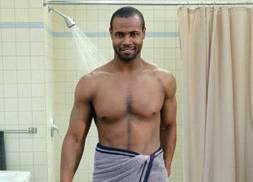 Isaiah Mustafa, the towel-wearing star of the Old Spice commercials, is on a roll.

Already set to appear in an episode of 'Chuck' and an upcoming Tyler Perry movie thanks to his memorable TV spots, Mustafa has revealed that he'll be appearing in 'Horrible Bosses', starring Jennifer Aniston (photos

"It's a smaller role, but who wouldn't want to be in one of these funny, irreverent comedies?," he tells THR. "The cast is great. I'm playing a cop, because I play these authoritative characters well. I don't know exactly who I'm in the scene with... maybe Jennifer Aniston!"

"I'm going to be filming an episode of 'Chuck' next week," he confirms. "I don't know how many episodes yet, but I do know I'm playing an official CIA guy. The character is pretty goofy, so it's going to be fun."

The former NFL player has helped Old Spice increase the sales of their products by a monumental 107% in the past month as a result of his Emmy-nominated spots.

Check out his most well known commercial below: