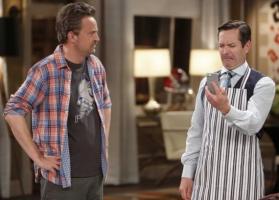 CBS has released a two minute video that takes us behind the scenes and previews its 'The Odd Couple' remake starring Matthew Perry as Oscar and Thomas Lennon as Felix.

In the series the pair become unlikely roommates after the demise of their marriages.

This comedy is slated to premiere on February 19 following 'The Big Bang Theory'.