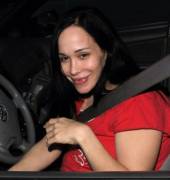 Talk about a match made in heaven. Nadya Suleman, the mother of fourteen children including a set of octuplets, says she thinks Jon Gosselin is 'hot'.

"I kind of have a crush on Jon Gosselin," the single mother tells 'Radar'. "I think he's hot... he looks cute in purple!"

Not that she doesn't feel for estranged wife Kate and the kids.

"I feel for her. I wish everyone would leave her alone," she says. "I'm sure she trusts herself and trusts that she's strong enough to handle it."

The comment marks a change of heart for the 33-year-old, who took a shot at the troubled reality show couple months ago.

"She needs to stop being so judgmental and stop pulling at straws for attention," Suleman said in June. She accused Kate of being "desperate for attention" and "over-emotional."

So how long till she gets together with Jon and starts filming a 'Jon and Nadya Plus 22'? Despite shopping her own reality series earlier this year and a two-hour Fox special in August, Suleman claims that's the last thing she would want to do.

"I already made up my mind a long time ago," she says. "I think it's exploitative. I don't care what the dollar amount would be. It's not worth it. It's not healthy for the kids."