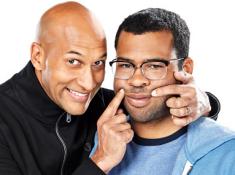 "Despite our differences, we count on our press to shed light on the most important issues of the day," said Obama.

"We can count on Fox News to terrify all white people with some nonsense," Key translated.

"Protecting our democracy is more important than ever," said Obama. "For example, the Supreme Court ruled that the donor who gave Ted Cruz $6 million was just exercising free speech."

"Yeah, it's the kind of speech like this: 'I just wasted 6 million dollars,'" joked Key.

But it was when Obama became upset over global warming that Key thought he no longer needed his services.

"I mean look at what's happening right now, every serious scientist says we need to act. The Pentagon says it's a national security risk," Obama said. "It is crazy! what about our kids! What kind of stupid, short-sighted, irresponsible ..."

"All due respect sir," Key interrupted. "You don't need an anger translator. You need counseling."

Obama took several shots at the dinner, including one at his biggest critic, Dick Cheney.