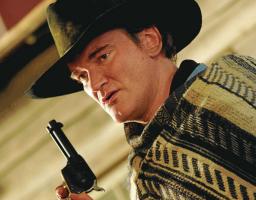 Director Quentin Tarantino is coming under fire from the NYPD after he attended a rally protesting cases of police brutality in New York city.

Tarantino held a photograph of Justin Smith, an Oklahoma man killed in police custody after spitting on cops.

The rally came at a bad time since it was merely four days after an NYPD Officer Randolph Holder was shot in the forehead while chasing a gunman.

Tarantino admitted as much to the New York Post and called it "unfortunate timing."

"But we've flown in all these families to go and tell their stories. That cop that was killed, that's a tragedy, too," he said.

"It's no surprise that someone who makes a living glorifying crime and violence is a cop-hater, too," he said in a statement. "The police officers that Quentin Tarantino calls 'murderers' aren't living in one of his depraved big-screen fantasies — they're risking and sometimes sacrificing their lives to protect communities from real crime and mayhem."

"New Yorkers need to send a message to this purveyor of degeneracy that he has no business coming to our city to peddle his slanderous 'Cop Fiction'. It's time for a boycott of Quentin Tarantino's films."