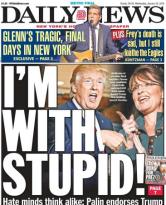 The New York Daily News has never been shy about letting its opinion be known and Wednesday's cover is no different.

The newspaper slams both Trump and Palin with a cover following former Alaska Governor and 2008 GOP vice-presidential candidate Sarah Palin's endorsement that reads "I'm with Stupid!"

Palin officially endorsed Trump on Tuesday as she joined him at a rally at the Iowa State University.

"And I'm thinking, 'Like you guys haven't tried to do that every night since '08! I'm still standin.'"