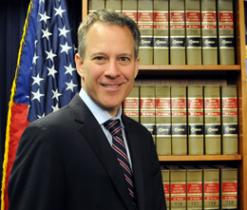 Attorney General Eric Schneiderman talks to Seth Meyers about how he wound up on Donald Trump's enemies list and what it's like to sue the President.

Schneiderman says "Trump University" was like a fraud with a neon sign and explains why he wants to keep the Obama era climate policies intact.

"We're going after him but it's all policy. It's not him personally," Schneiderman explains. "There are a lot of merits."