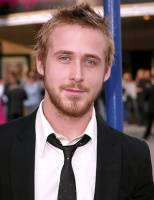 It may have been the film that helped him break into Hollywood, but Ryan Gosling says the 'Notebook' director didn't cast him because of his good looks.

"The director, Nick Cassavetes, called me to meet him at his house," Gosling tells British magazine Company.

"When I got there, he was standing in his back yard, and he looked at me and said, 'I want you to play this role because you're not like the other young actors out there in Hollywood."

"You're not handsome, you're not cool, you're just a regular guy who looks a bit nuts."

The 2004 film helped Gosling make a name for himself and meet Rachel McAdams, the co-star he went on to briefly become engaged to.

But Gosling says there was another reason he wanted to get into showbusiness.

"One day, I saw Raquel Welch on The Muppet Show. She was dancing with this big furry spider and I immediately fell in love," he explains.

"She was the first crush I ever had, and I thought, 'How do I get to meet this woman?' And then I thought, 'Well, she's on TV, so to meet her I have to get on TV myself."