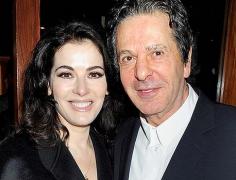 Prominent art collector Charles Saatchi says he's divorcing his celebrity chef wife Nigella Lawson because she didn't publicly defend his reputation after photos showed him with his hands on her throat in a London restaurant.

Saatchi described the act as a "playful tiff" during a debate about their children but was later given a police "caution" after admitting assault.

"I am sorry to announce that Nigella Lawson and I are getting divorced," he says statement.

"I feel that I have clearly been a disappointment to Nigella during the last year or so, and I am disappointed that she was advised to make no public comment to explain that I abhor violence of any kind against women, and have never abused her physically in any way."

"This is heartbreaking for both of us as our love was very deep," says the 70-year-old, "but in the last year we have become estranged and drifted apart."

"The row photographed at Scott's restaurant could equally have been Nigella grasping my neck to hold my attention – as indeed she has done in the past."

The couple, who were spotted dining together at the same restaurant a week after the photos, have been married since 2003. Rumors about a divorce first began to fly after Lawson was photographed without her wedding ring following the tiff.