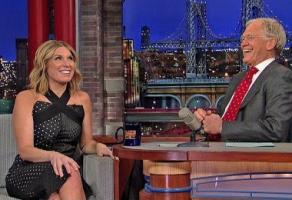 In an appearance on the 'Late Show' with David Letterman, Nicolle Wallace, who was a senior advisor for the McCain–Palin campaign, mocks Sarah Palin and her qualifications for the job.

"Everyone was saying that John McCain was facing such a formidable opponent in Senator Obama that he had to do something out of the box... and picking her certainly was," says Wallace.

"It was an inspired choice but the way it played out is obvious to everybody. John McCain is one of the most respected voices on the world stage and she just couldn't go toe to toe with his knowledge and experience."

"I think in our politics you have to be able to check all the boxes. She was able to provide excitement but she wasn't able to prove that she had the experience for the job. And she gave a speech this weekend in Iowa where, again in full display, were all the gaps in her knowledge."

"That's when it became obvious not just to the public but to us," she laughs. "That was sort of chilling."

Wallace then jokes that she should've probably coached Palin on the newspapers she read.

"She blamed me for that one," Wallace says, referring to the Katie Couric interview. "She was right to blame us. She was not handled in a way that showcased her strenghths after that convention speech."

"It's just that as somebody who had worked in politics for over a decade, I'd never encountered somebody like her," she laughs.