Nicole Kidman Explains Her Seal-Like Clapping At The Oscars 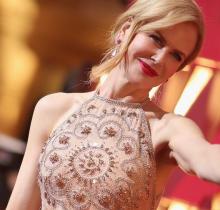 ) explained her strange seal-like clapping at the Oscars during an Australian radio interview on Wednesday.

Speaking with hosts Kyle and Jackie O, the 'Big Little Lies' star explained that she had someone else's ring on her fingers which made it difficult to clap.

"It was really awkward," Kidman admitted. "I was like, 'I wanna clap, I don't wanna not be clapping’ — that'd be worse, right? Like 'Why isn't Nicole clapping?'"

"So therefore I'm clapping but it was really difficult because I had a huge ring on that was not mine — but it was absolutely gorgeous — and I was terrified of damaging it."

Kidman also recalled the Best Pictures mix-up and said the audience was as confused as the viewers.

"It was bizarre. I wasn't sure what was going on," she said. "No one in the audience was. Then there was some shuffling, envelopes — and people rushing onstage … I was like 'What is going on?'"

"I thought someone wasn't well... and then I saw people's faces dropping. It was bizarre."