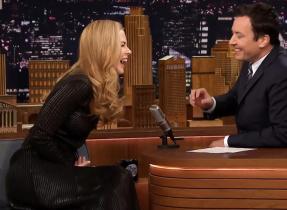 ) brought back some embarrassing memories for host Jimmy Fallon after the actress reveals she wanted to date the comedian but thought he wasn't interested after he fed her cheese, corn chips and leftover Chinese food.

Fallon is shocked to learn that their meeting was supposed to be a date and he had thought it had been for a movie role all these years.

"And then you put a video game on or something," says Kidman. "I was like this is so bad! It was bad. And you didn't talk at all."

"And so after about an hour and a half I thought he has no interest. This is so embarrassing. And I left and thought 'Okay, no chemistry.' And then I went 'Maybe he's gay!'"

After the revelation the chance to have a normal interview was out the window and the two couldn't stop laughing for the entire segment.