Nicole Kidman: Divorce From Tom Cruise Was A 'Shock To My System' 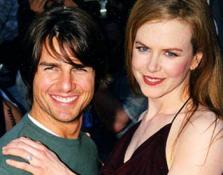 ) says her marriage to Tom Cruise over ten years ago was happy but extremely isolated.

"I was totally smitten -- I fell madly, passionately in love," Kidman, who was 23 when she married Cruise in 1990, tells DuJour magazine. "I was reeling with Tom. I would have gone to the ends of the earth for him."

But being married to Cruise also came with media attention that she wasn't used to: "We were in a bubble, just the two of us," she says. "We became very dependent on one another."

Kidman says she "was so impulsive and naďve" and thought "our life together was perfect," until the surprise divorce.

Kidman is now married to country star Keith Urban, and the couple have two daughters together.

"He is a wonderful, caring man and he makes me feel secure," she says. "We don't ever like to be separated."

"It took me so long to have a child. I feel enormous gratitude. Sunday has healed an enormous amount in me," she adds. "It's a very private thing, but she just has."