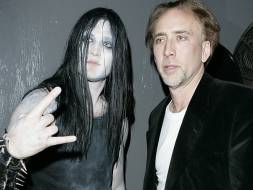 Nicolas Cage's son was hospitalized on Tuesday after he got into a fight in Hollywood.

The Los Angeles Times reports that the 20-year-old Weston, a rock musician, had to be taken to Cedars-Sinai Medical Center after he began fighting with an unidentified person near the intersection of Selma Avenue and Ivar Avenue.

TMZ says the unidentified individual was Weston's trainer and the younger Cage went ballistic during lunch after he was told he couldn't eat something on the menu.

"We are confirming there was a situation at Selma and Ivar Avenues about 4:10 p.m. A man was taken to a hospital with minor injuries but there is no criminal investigation and no arrests," says the LAPD.

Weston was accompanied by his father as he was treated for unspecified but minor injuries. Apparently the apple doesn't fall far from the tree.